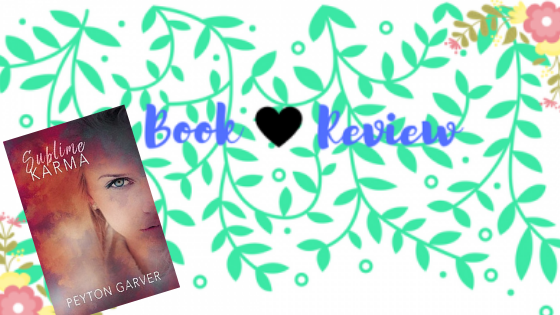 “Crimson Color
You are falling under
You replace the hurt with pain
No, you’re not insane
You replace the hurt with pain
To rein in your thoughts again
And why you’re all alone
It seems there’s no escape
unless you can find another way
You can lean on me
You are not alone
I’ll be there for you
I’ll help pull you through
There is another way
Open up your eyes and see
I’ll take you there with me”

I was recently sent Sublime Karma by the author, Peyton Garver in exchange for an honest review. If y’all think you have had enough of teenage drams – prissy cheerleaders, narcissistic jocks, mysterious emos – welcome to Sublime Karma. In this novel issues of teenage depression, self-harm, domestic abuse, peer bullying are all brought to the forefront as Garver brings together two distinctly different high schoolers into a romantic and potentially fatal romance. This book has touched my heart, feelings, thoughts in a way that no story – not even Go Ask Alice or our favorite psychological classic, The Bell Jar has ever done before.

When Brie’s stepfather moves the family for what he calls a new beginning, it’s not the new beginning the beautiful, yet guarded, senior would have hoped for. Brie is instantly targeted by jealous girls at her new school, and the only available seat on her bus is next to the school’s star wide receiver, Jake. After a humiliating article and picture of Brie is posted in the online school journal, a demon she thought she’d overcome resurfaces, and her life unravels. A newly compassionate Jake has finally taken an interest in her, but can Brie learn to trust her heart, or will she miss out on the best thing that ever happened to her?

Jake has his own secrets and has built his own walls, but eventually his curiosity about the new girl gets the best of him. Unfortunately, now there is competition: the captain of her cross-country team. Jake’s romantic histories with the girl next door and the school’s queen bee, adds tension to a simmering tempest when all he wants is Brie. Is he strong enough to help the one he loves weave sense into her crumbling new reality while overcoming his own tainted past?

Beginning, continuing, and ending as a novel heavy in dialogue and brief in illusion and description, Sublime Karma paints a portrait of your typical high school novela. Everything at Jake’s high school seems to be running just as, according to drama-dictionary standards, just as it should be. Jake is our average high school jock, a star football player and member of the up-and-coming band, Sublime Karma. He finds himself stuck in a love triangle with the girl next door, Ari and the two-timing chick, Sarah – neither of which he could say he loves.

Brie moves into town with a past that unravels as the novel continues to build suspense. Clearly troubled by her past and nervous to starting fresh in a new suburban town, Brie’s first encounter with Jake marks the onset of a chain of formidable event that do not only change their life but as well as that of those around them. From the moment that Jake (reluctantly) assents to let Brie sit next to him on the bus, being the only empty seat left, she automatically becomes target to a new wave of harm that will, by the end of the book return to her perpetrators – indeed what we could call sublime karma.

Brie joins the high school cross country as a way to “keep herself busy.” On her first day of practice she meets the charming captain of the team, Ryan. Proving to be a threat, not only because of her beauty but also for her talent as a long distance runner, Brie immediately arouses jealousy from the other teammates. Ryan, on the other hand, is already falling for her. Ryan is all that a girl could hope for – handsome, kind, understanding, but is this really what could mend the wounds of this sad girl?

Inevitably finding herself blown away by Ryan, yet intrigued by Jake, Brie struggles to fit in at the new school and keep her painful past behind her. As the novel progresses, Brie and Jake find themselves drawn to each other for their “baggage.”

Garver addresses a variety of issues beyond the usual high school bullying and short-lived high school relationships. As already mentioned, this novel is brief in description and heavy in dialogue, probably more fit for a screenplay than actual book, but the relationship between the characters, both the protagonists and supporting characters, is vivid and real. I was especially touched by the transformation that Jake undergoes throughout the novel and his overall role in Brie’s suffering and, ultimately, her healing.